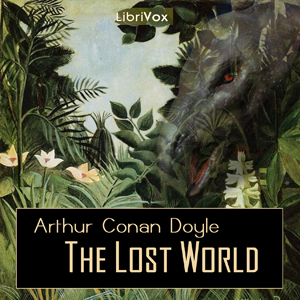 Imagine a strange, tropical place that is almost inaccessible. Time appears to have stood still there. Species of animal and plant life not seen elsewhere on Earth, except in the fossil record, inhabit the place. The lakes heave with the shapes of huge grey bulks moving under the surface. The woods are places where chittering cries move about above your head, as powerful apes move swiftly in the canopy of leaves. Then, a tree splinters nearby, and a dinosaur steps out from his hiding place... and he's eyeing YOU.

Jurassic Park? Not quite. The Lost World was an inspiration for Jurassic Park; in fact, a character in J.P. has the same name as one of the chief characters in The Lost World. It also inspired King Kong. But this is the original! Four adventurers go off to find the place shown in a dead man's sketch book - they find a war between apes and Indians, prowling dinosaurs, a sparkly treasure hidden in the blue clay - they find the Lost World. And because of the treachery of a native guide, their means of escape is destroyed!

Reviewer: Sayeth - favoritefavoritefavoritefavoritefavorite - July 6, 2010
Subject: Free Listens review
Although the premise for the book can now be seen as impossible, Challenger's assertion of living dinosaurs is met with extreme skepticism by his colleagues in the novel, effectively removing the reader's ability to criticize it. The story proceeds at a gallop, with new adventures happening every chapter. This book is fast and fun, making it a great light read for the summertime. For full review and other reviews, see http://www.freelistens.blogspot.com

Uploaded by librivoxbooks on November 11, 2007